Kellihers Electrical  – Ireland’s leading electrical wholesaler – was selected by parent company, Rexel, to be the first international partner to overhaul its legacy Enterprise Resource Planning (ERP) system. The challenge was to find an IT services provider who could deliver all of the required functionality – using Microsoft systems to ensure compatibility with Kelliher’s existing infrastructure.

Kellihers Electrical serves industry professionals all over Ireland, across 22 branches, on a daily basis – from major industry players to independent smaller scale contractors.

“The Single Biggest Upside Of Using Dynamics Is Its Ease Of Use For Our Entire Team. We Deliberately Kept Our In-House ERP Team Small – Which Allowed Us To Make Fast Decisions And Get Things Done In An Ambitious Time Frame.”

Part of Paris-based Rexel Group since 2006, Kellihers has thrived as a member of the global electrical supplies company’s international network – cementing the brand’s prime position in the Irish marketplace and contributing to its ongoing success. However, to continue to meet expectations – from providing a best-in-class customer experience to delivering competitive pricing – Rexel was keen to overhaul its partners’ ERP systems, choosing Ireland as its first test market.

Rexel already had a very strong relationship with Microsoft, so it made sense for Kellihers to find an ERP system that was compatible with its current IT systems. After a detailed selection process, Microsoft Dynamics 365 Finance and Operations was selected as the chosen platform.

However, as deployment was to be made locally, there was an urgent need to find a best-in-class Ireland-based IT services provider who could design, develop, and maintain the required systems – across all of Kellihers’ stores – in a relatively short time frame given the scale of the project: just 12 months.

Essentially, the overall requirement was for a reliable, scalable software solution that would integrate with nearly every aspect of Kellihers’ business operations. This included maintaining the right levels of stock, purchasing, pricing, quotations, logistics, invoicing, discounts – basically every operational function that enabled the stores to serve their customers.

As Microsoft Dynamics specialists and given their strong track record, Dublin-based Sysco Software Solutions was chosen to tackle Kelliher’s ERP overhaul. However, Microsoft was involved throughout the process, working closely with Sysco and Kellihers to help identify core business needs.

Beginning in January 2017, a phased ‘sprint’ approach was taken – and a small, agile team of internal champions formed within Kellihers to make sure a swift approval process was possible at each project milestone.

While the new system was extensive, there were numerous key requirements that were urgently addressed. Sysco created an efficient search tool for Kellihers’ extensive product listing – along with easy access to key sales information. The ability to process different orders – depending on the payment terms or methods – was essential too.

Another major area of complexity for Kellihers was its pricing structure – along with the way in which quotations and Requests For Quotations (RFQs) were managed. Using Microsoft Dynamics 365 Finance and Operations, these could now be easily produced and updated in real-time for customers, ensuring product costs could be recorded at their most up-to-date (shifting) price point each time.

In addition to upgrading all of the necessary software, to ensure that its stores could easily access the new cloud-based Dynamics 365 Finance and Operations platform on a national level, Kellihers invested in the necessary IT infrastructure – installing fibre broadband into all 22 stores.

Training staff on the new system was also another key concern given the number of stores, staff, and the ambitious timeframe.

Sysco implemented a ‘train the trainer’ approach – in which a team of ‘super users’ from different stores were identified, trained to a high level, and deployed to deliver practical training to their colleagues in their individual areas.

After a stress-free implementation period; thanks to Sysco’s efforts and the new cloud environment, Kellihers now has a single, unified view of its entire business – including real-time, accurate inventory, and pricing information from a single data source.

In addition to speed and ease of use, Kellihers’ new system makes all inventory queries, quotations, and estimates accessible online, from any store – functionality that just didn’t exist with the previous system. 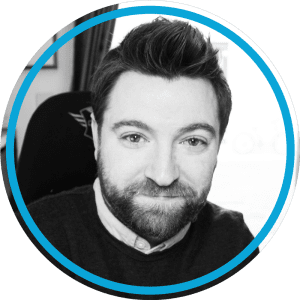 Recommending a platform for your organisation starts with SmartStep

Microsoft Dynamics 365 ERP Suite named as a leader in the Gartner Magic Quadrant for Cloud ERP.

Learn how our customers use Dynamics 365
Recent Blog Articles 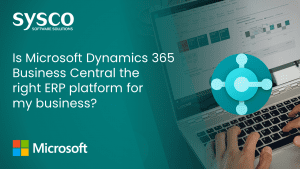 Is Microsoft Dynamics 365 Business Central the right ERP platform for my business?

Selecting the right enterprise resource planning (ERP) platform can be a challenging and time-consuming process. With so many different options available, it can be difficult 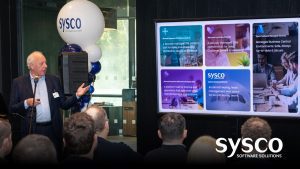 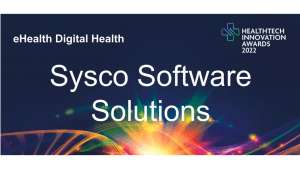 Sysco Software are delighted to announce our acceptance of the eHealth Digital Health Award at HealthTech Ireland’s Innovation Awards 2022 held on the 23rd November in Dublin for our comprehensive delivery of the HSE’s COVID Care Tracker project.

We may place these for analysis of our visitor data, to improve our website, show personalised content and to give you a great website experience. For more information about the cookies we use, use the customise button to open the settings.

This website uses cookies to improve your experience while you navigate through the website. Out of these, the cookies that are categorized as necessary are stored on your browser as they are essential for the working of basic functionalities of the website. We also use third-party cookies that help us analyze and understand how you use this website. These cookies will be stored in your browser only with your consent. You also have the option to opt-out of these cookies. But opting out of some of these cookies may affect your browsing experience.
Necessary Always Enabled
Necessary cookies are absolutely essential for the website to function properly. These cookies ensure basic functionalities and security features of the website, anonymously.
Functional
Functional cookies help to perform certain functionalities like sharing the content of the website on social media platforms, collect feedbacks, and other third-party features.
Performance
Performance cookies are used to understand and analyze the key performance indexes of the website which helps in delivering a better user experience for the visitors.
Analytics
Analytical cookies are used to understand how visitors interact with the website. These cookies help provide information on metrics the number of visitors, bounce rate, traffic source, etc.
Advertisement
Advertisement cookies are used to provide visitors with relevant ads and marketing campaigns. These cookies track visitors across websites and collect information to provide customized ads.
Others
Other uncategorized cookies are those that are being analyzed and have not been classified into a category as yet.
SAVE & ACCEPT
Powered by